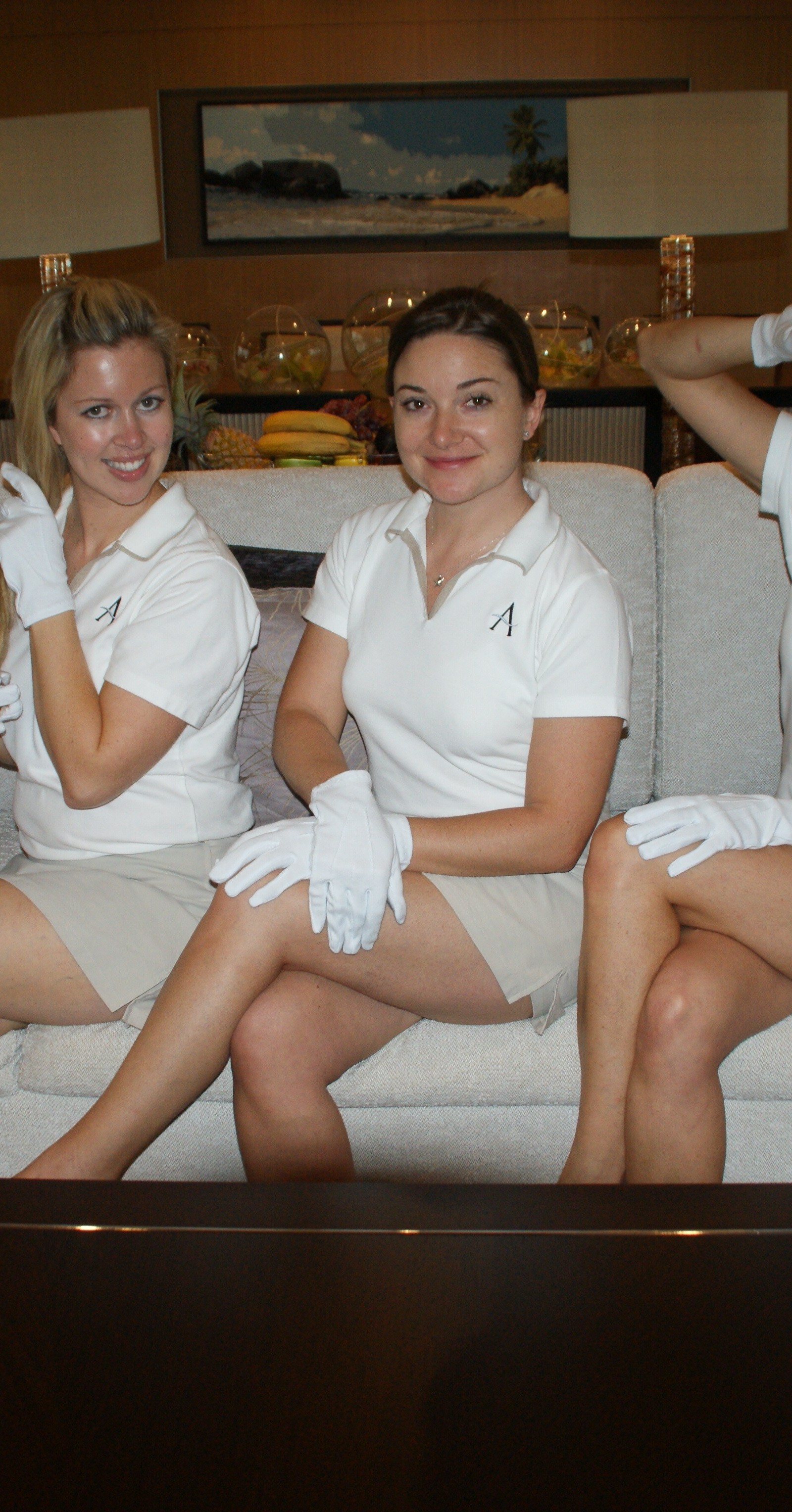 You are here: Home / Bravo's Below Deck / Yacht Stews Must Be Prepared for Anything Demanding Guests Request (or Might Request)

A sample “Confession” from The Insiders’ Guide to Becoming a Yacht Stewardess: Confessions from My Years Afloat with the Rich and Famous… Julie and her fellow stews went “overboard” to make sure the billionaire guests on a megayacht chartered for the Monaco Grand Prix had all their requests met—even when the stews were caught off guard. (This may remind you Bravo Below Deck Season 1 fans a bit of green juice. Season 2 fans may recall Episode 3 and the “mint” Kate made for the mojitos.)

No matter how hard I tried to be prepared for anything,
I was caught off guard a lot.

New or wanna-be yacht steward/esses take note: This next tale demonstrates the importance of remaining organized enough in your daily routine that when emergencies arise, your problem-solving skills kick in on autopilot. 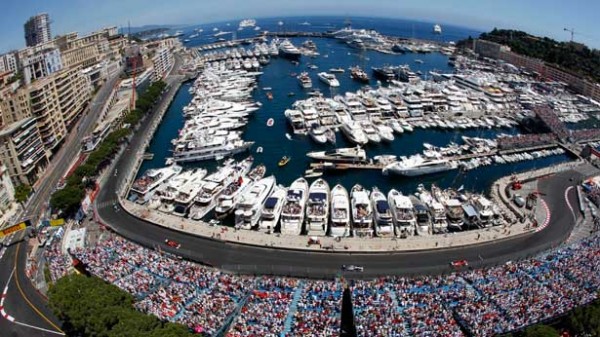 We had a charter on for the Monaco Grand Prix, and it was the morning of the race… When breakfast began, we were prepared to serve the 12 individuals who had slept onboard the night before their morning meal—these were the guests we knew of. However, the main charter guest owned a home just around the corner from where we were docked, and little did we know, but he had instructed our deckhands to take one of our dinghy boats there to shuttle over an entire slew of additional guests, who would be arriving in time for the race.

And arrive they did… just as we were wrapping up breakfast. 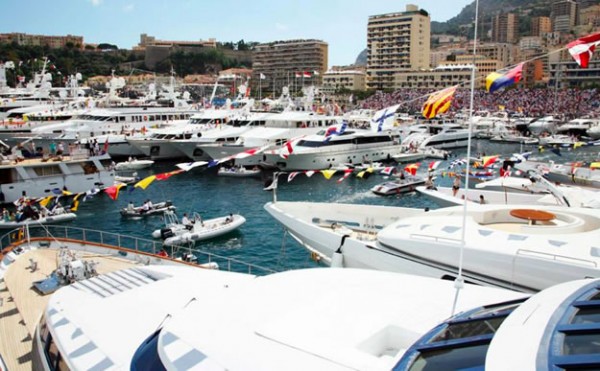 The next thing we knew, we were taking requests for omelets (egg-white only, of course) and cappuccinos from 20 of the newly arrived. Fortunately, we were on the dock, so one of our deckhands was able to run to a nearby grocery store for more eggs. 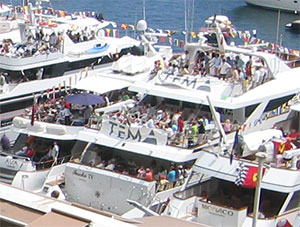 If that wasn’t bad enough, by the end of the day, the number of guests had swelled to over 50. And wouldn’t you know: it was champagne all around at the finish of the race. Ah, but wait! Champagne must be served in champagne glasses!

(You’ll be hard pressed to find any megayacht carrying 50 or more of any one type of glassware. Normally, you would order extras for a special occasion, but remember, we were not forewarned about these additional guests.) 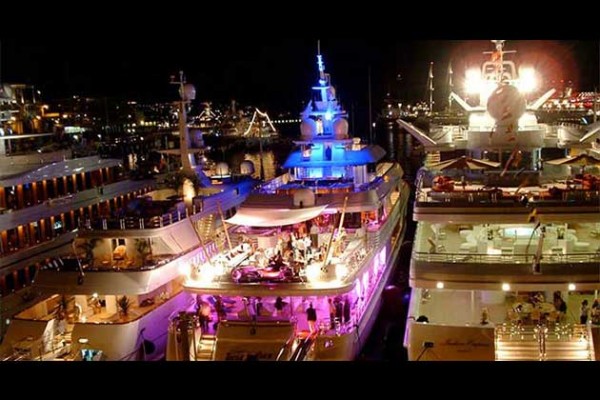 So yeah, we were in a bit of a predicament. We had to think fast.

I leaned over the side of our boat and got the attention of the chef on the yacht next to us (for the Formula One race in Monaco, they pack these gargantuan floating palaces in like sardines). I asked the chef across the way if they had any extra champagne glasses we could borrow.

“Sure, I’ll walk them over,” she replied.

At that point, a stewardess on her boat joined in, and they began handing glasses overboard to us, one at a time. We were able to rack up another 25 glasses and pulled off the champagne toast with success! (Whew.)

Okay, so maybe that’s not the wildest story I can tell. I’m sure many of my fellow yacht steward/esses out there—both current and former—could one up that tale several times over. (And we’d love for you to give us your confessional story).

But what it does is demonstrate that, as a yacht stewardess, you are expected to be prepared for anything at any time. It also sheds a little bit of light on what type of person is cut out to be a yacht crewmember.

… And yeah, it kind of reminds me of the green-juice scenario experienced by Bravo TV’s “Below Deck” Season 1 crew (and more specifically by chief stewardess, Adrienne Gang) in Episode 2, “It’s Not Easy Being Green.”

Could the green-juice fiasco have been avoided if Adrienne had been more prepared?
Photo Source: BravoTV.com

Was Adrienne to blame that the guests requested something she and the rest of the crew were unprepared to handle at such a large scale? Simple mistake or a stewardess sin? (Let me know what you think in the comments below.)

And then there was Season 2 when the guests ordered mojitos, only the mint that was on the provisions list had never arrived. Instead, Chief Stewardess Kate Chastain launched into problem-solving mode and improvised mint by combining mint syrup, basil and chervil. Call this a service sin if you want, but I have commend her for making due with what she had:

And while I do admire Kate’s ability to think quick on her feet, keeping this charade up the entire trip wasn’t too respectable. I can imagine if this weren’t a T.V. show, and the guests weren’t only on for three days, the crew would have called into stores at nearby ports and managed a way to get mint onboard by the following day. (And knowing Kate, that’s what she would have done under different circumstances.)

In the real world of working on superyachts, had there been a billionaire mogul-type onboard, especially if it was the owner, this situation would have been classified as a definite crisis, and the crew would have gone to great lengths to rectify the situation immediately. One hears tales all the time of special ingredients, foods, wines—you name it—being helicoptered in at a moment’s notice in the superyacht industry. In fact, I once had to have Special K cereal shipped overnight from Antibes, France to Crete. We had run out of the owner’s wife’s favorite breakfast food, and she would accept no substitutes. (Mind you, when we did the provisioning, no one counted on the fact that she’d eat Special K not only for breakfast, but as both a snack throughout the day and a cure for midnight munchies!)

Regardless of how you think either the “green-juice-gate” crisis or the “manufactured-mint” ordeal could have been avoided on Below Deck, I think there are some lessons here about what skills are required when you work on a superyacht. (And the following is straight from my book):

What the Above Story Demonstrates for Interior Yacht Crew—Current & Future

As a stew, you are expected to be prepared for anything at any time. Guests on yachts don’t care how you get something done, so long as you get it done. You must be able to think quickly on your feet and control your emotions in crisis situations. The big rule is to get the mission accomplished, but never let them see you sweat (even if it’s a 90-degree day in Capri, and you’re serving lunch on the sundeck). 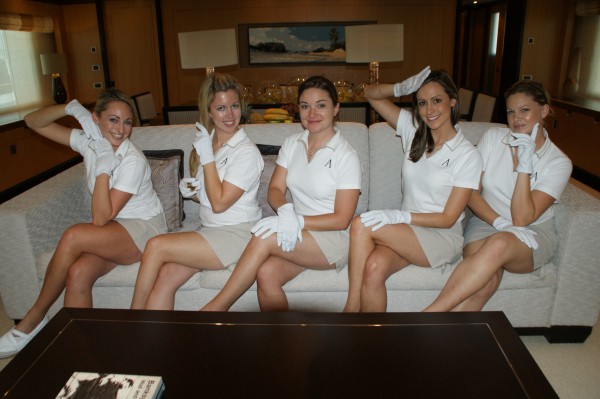 Furthermore, in order to meet a demanding or eccentric guest’s requests, you have to be willing to go that extra mile. It helps to have good persuasive speaking skills when it comes to obtaining things from the outside world. If you’ve ever worked in sales, this is most likely a talent you developed along the way. Sweet-talking local service people or yacht agents to help you get what you need never hurts. (Nor does flat-out begging.) Just whatever you do, don’t break the law; it’s not worth it to go that far.

Here are skills that every yacht steward/ess needs to have, even simultaneously:

The best yacht stews tend to be assertive people with strong organizational skills. You must have an innate ability to get things done, often while tracking several projects simultaneously. For this, exceptional project-management and prioritization skills are key. Let’s also not forget being detail-oriented; the ability to focus on minute details is an essential part of this job.

Being organized is an especially vital attribute for the chief stew, since he or she is the one managing the interior department and the rest of the stews. I cannot stress enough the importance of having systems in place to keep the everyday management of the yacht under tight control. A chief stew will usually be meticulously organized and will assign a place for everything on the boat.

As an entry-level stew, it is your job to then make sure that everything is in its assigned place. In other words: Follow the systems. Get comfortable with your daily routines so that they become automatic. You will be juggling a lot of various responsibilities at one time, and the chance of being interrupted at frequent intervals is high. It helps to make a habit out of writing things down on scraps of paper—things that you’ll need to remember to do or go back to doing later.

Once you’ve got your routines and operating systems down pat, the next step is learning how to be flexible with them. I think this is one of the biggest challenges for stews: being organized and flexible at the same time, since the two traits don’t necessarily go hand-in-hand. But when guests are onboard, you can never fully predict what’s going to be requested next, so if certain aspects of the day can run like clockwork (the organized part), then the more clear-headed you will be when it comes to handling a sudden crisis (the being flexible part). Have contingency plans set up in case there’s a mishap beyond your control.

On the whole, things rarely go as planned in this industry, and it’s also not unusual for things to change suddenly. Owners and guests of megayachts are typically eccentric people, and they are used to getting what they want, when they want, and they make decisions and requests on a whim. You never know what to expect. That lack of control and of living on somebody else’s schedule is a definite challenge for yacht crew. This is why you need to be a flexible person.

Interested in more advice on how to become a yacht stewardess and what it takes to handle the job? Download Chapter 1 of The Insiders’ Guide to Becoming a Yacht Stewardess 2nd Edition here. 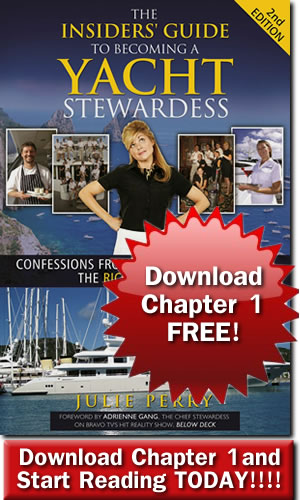